If I were asked to look in a dictionary for a definition of Norm I would without hesitation go directly to character. I first met Norm when I was working the National Street Rod Nationals in Louisville Kentucky in 2005. He was showing Kookie 2. We hooked up again later that year at the SEMA show In Las Vegas. I am sure that I am no different than anybody that has spent some time with Norm that they would have a story or two to tell. Part of my responsibility while working for Performance World Custom Ca r& Trucks Show was finding features vehicles and celebrities. To me the ideal feature package is to sign a celebrity and have him or her bring a vehicle they designed and built.

Norm was from Arkansas and was known as the father of the T-Bucket. Kookie T a 1922 T-Bucket is most likely the most well-known hot rod. It set the standard for other t-buckets to follow. It was the hot rod that Edd Byrnes drove in the tv series 77 Sunset Strip with Suzanne Fabray in the passenger’s seat. In addition to the Kookie T he also built a 1923 truck known as the KINDA FRESH FISH TRUCK and BOOGIE TIL YOU PUKE flatbed truck and KOOKIE 11

We talked about him coming to Performance World as a guest celebrity and if possible, bring one of his vehicles. Transportation of the trucks size meant that a hauler would have to rented. Norm had converted a small moving van into a hauler and hang out spot to move Kookie 11 around the country. The van was typical Grabowski style multi – colored primer, exposed welds, numerous decals and it was the kind of vehicle that when it passed you on the highway you asked yourself what was that. A deal was done and Norm and Kookie 11 were coming to Toronto.

After the contract was signed Norm and I talked numerous times and I started to get this feeling in the bottom of my stomach that something was amiss. He kept bringing up the border crossing, he had heard all kinds of stories about how difficult it was to bring a car into Canada. This was before you had to have a valid passport to cross. I assured him that in the past we did not experience any serious problems with border crossings. He must have the vehicle ownership’s for the two vehicles and that I would have our customs broker talk to him. In the past if we felt there might be issues with the border crossings, we would recommend that they arrive a day earlier, this would allow time for our broker to deal with customs.

Norm said no problem that they would cross on Thursday, set up day. I asked him to call as soon as he cleared customs. He called mid-morning Thursday and said he was in Canada (BUT). My heart skipped a few beats as I expected the worst. He explained when he reached customs, he was pulled over and they went through the van, after about an hour they said he was good to go. It was not until he was driving down the road that he realized that he had left his wallet and credentials in the customs office. So, he had to go back to the states pick up his credentials and through customs again. Only Norm could get away with that.

The spectators loved him, he was the life of the exhibitor party on Friday and an all-around great guy to spend the weekend with. We discussed if he was going to stay Sunday night that we should hook up at the hotel and have a few bubbles. He decided because of the show closing at 6pm that he would head home.

Jason the operations manager for Performance World always insisted the we stay overnight in Toronto on Sunday so that Monday morning he could walk the building with the International Center to determine if any damage had been done during move out. It is also important to do this before the next show starts to move in.

As we were driving up Airport Road, we pull into Tim’s to get a coffee. To our surprise sitting in the lot is Norms van. We both look at each other and say, “what now?”. As we approach Norm and his buddy, they are all smiles and invited us to sit with them. As part of Norms appearance contract, he could sell his merchandise (Posters). When he crossed into Canada, he told customs they were promotional give always. His concern was that he had bags of – as he said – “of these stupid loonies and twoonies” and he did not know how he was going to explain them to customs. We both started to laugh. He said they were waiting for the banks to open to see if they would convert them to USD funds. 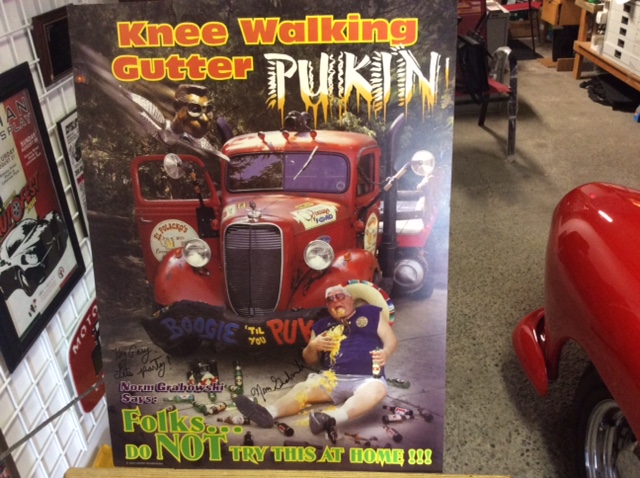