I have been attending the SEMA show for approximately 30 years. If my memory serves me correctly my first show was in 1990. It all started by being asked by my good friend Bob Larivee Sr to work the Hot Rod Heritage Fine Art Booth. Little did I know at that time how important working that booth would become. There are so my stories to be told that to try to cover it in one article would not be fair to SEMA. So, over the next few months stay tuned to my website for tales from SEMA.

If you are a car guy and have oil in your blood, I am sure attending SEMA is on your bucket list. SEMA is so much more than a car show, sure the cars are the stars but once you get the feel for SEMA your hooked. There is so much to see, renew friendships or make new ones, seminars, unveiling of new vehicles, after show parties, celebrity signings and the Las Vegas atmosphere. Every day you can attend early morning breakfast with industry leaders, have lunch with your favorite race car driver and in the evening attend an after-show reception and meet the dominant hot rod builders of today. You go to Vegas to see the shows, but not while the SEMA show is on your too busy, for all the times I have been attending SEMA I’ve only been to two nightclub shows. When my daughter Brandy decided that she was going to the SEMA show with me that all changed. After her first SEMA show she decided that maybe we should go the Vegas a couple of days before the show opens and stay a day or two after so that we could enjoy what Vegas has to offer. With her planning, we attended the NHRA drags, a Vegas Knights hockey game and the World Bull Riding finals just to name a few.

One of the disadvantages of working the Heritage Hot Rod Automotive Fine Art exhibit was that you were in the booth all day and that didn’t allow time to see the show, with the exception of the outside exhibits. (Interesting fact) the fine art booth was and still is the only exhibitor along with the SEMA souvenir booths to sell directly to the public. I didn’t realize at the time how valuable working the art booth would become and help me when I started to get involved with management of large indoor car shows.

Because Bob Larivee was so well known and that the art booth was usually located in the lobby or close to the entrance of one of the main exhibit halls it became a gathering place. People would say ok I will meet you at the Hot Rod Heritage Fine Art exhibit in a couple of hours. It was common to have 3-4 plus celebrities in the booth at the same time. I remember a time when John Force, George Barris, Reggie Jackson and Kenny Youngblood were together in the booth.

A sample of some of the stories to come from SEMA include being imitated by Jack Trepanier, Kenny Youngblood sketching in a bar, having breakfast with George Poteet, lunch with Boyd Coddington, attending an NHRA breakfast and meeting John D’Agostino, Ken Eberts, Andy Bristol etc. and working the booth with my son, Jason and then years later sharing the SEMA experience with my 3 girls Stacey, Brandy and Shannon.

My first story will be short and involves a school bus. In 2002, I was still working the art booth but I was also there representing Performance World Custom Car and Truck Show as there director of show cars and features.

I had a free day on the Monday before the show opened up on Tuesday so I decided to spend some time on the Vegas strip. As I was enjoying a cold one in the outdoor bar at the Flamingo Resort the distinctive sound of a blown car got my attention. Driving by was the coolest school bus; lowered, chopped, with a blower sticking up through the hood and lettering on the side that said WANNA BE COOL… STAY IN SCHOOL. As I was finishing my beverage, I thought the bus would be a great feature vehicle for Performance World, it would appeal to both children and adults especially the students on school day. But how do If find the owner, it was too late for the bus to be in a booth in an exhibit hall as the show was opening in the morning, so my only hope was that he was part of the feature vehicle display outside. When I could get away from working the art booth over the next 3 days, I would walk the show inside and out looking for features for Performance World especially the school bus, but no luck finding the bus. On Friday morning (the final day of the show) an individual enters the booth wearing a T-shirt that gets my attention. On the back of the shirt is the school bus that I have been looking for. I comment on his shirt and inquire how I would go about getting one. He said that is the Shortcut High school bus and it was owned by a friend of his. He made a call and asked the owner to meet him in the art booth. In a short time, Jerry Bowers arrived, Jerry is the owner and builder of the bus. We talked for a while about the bringing the bus to Performance World in Toronto as a feature vehicle. Jerry expressed interest in attending but would have to check his schedule when he got home. His main concern was transportation, because of the time of year (weather) he would not be able to drive the bus. It would have to flat bedded to Toronto. Jerry is from Magnolia Delaware. The bus is a 1949 Ford that has been chopped and lowered 3 1/2 feet. We exchanged business cards and agreed to talk. I am happy to say that a deal was done to bring the bus to Toronto. Jerry was going to come a couple days earlier as we had made arrangements to have the bus on breakfast television. To be on breakfast television you must be at the studio at a god-awful hour in the morning.  Jerry had no problem getting to Toronto but the night before he was to appear on the tv show there was a tremendous snowfall. We could have cancelled but we decided to honor our commitment. We got up extra early to allow us extra time to make the trip from the International Centre to the studio in downtown Toronto. When we got there, we were advised the there was no access to the studio for vehicles, they wanted Jerry to unload the bus and drive it across the parking lot in a snowstorm. Both Jerry and I agreed that that was not going to happen. 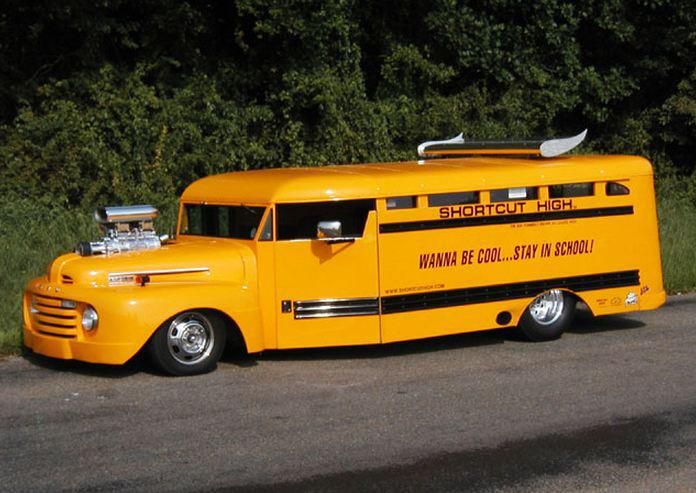 Jerry did the interview standing by the flatbed with the bus on it in the blowing snow.
This had to be a first for breakfast television. SHORTCUT HIGH was an outstanding feature and well worth the effort.

I have another story about the bus that took place during the NSRA Nationals in Louisville Kentucky.
…..Stay Tuned.